The Addams Family was a huge artistic success for the society, delighting audiences and attracting the most wonderful feedback ever.
The new and previous members of our society fit in beautifully and excelled in their roles. The lack of tiered seating reduced our capacity somewhat, however the KMTC team produced an excellent, entertaining, funny and musically special show.

We welcomed some new names to KMTC for this show, and we hope to see them in future shows.

I was very excited to go and see Keighley Musical Theatre’s production of ‘The Addams Family’ – it was a “first” for me, never having seen the musical, the film nor the TV show previously!
I have to say right from the start we knew we were in for a treat. John Sandland and his fabulous orchestra sounded superb from the opening chord. They tackled the difficult score with ease and were a joy to listen to.
All of the principals embraced the characters and were an absolute pleasure to watch. Dennis Maher was outstanding as Gomez – with excellent characterisation and a superb singing voice, which had such clarity. Nicky Burrows played Morticia with elegance, charm and beauty and you can never fail to notice her stunning vocal range.
Making her debut with KMTC was Danielle Ormerod as Wednesday – what a confident and accomplished performance from this young lady. Her singing was an absolute joy, nailing every single number.
Her brother, Pugsley, was brilliantly played by Harvey Dewhurst – his characterisation was excellent throughout, and he also had strong vocals.
The loveable Uncle Fester, played by Jonny Tate, went that extra mile with his characterisation and delivery. I suppose you could say he went further than that extra mile as he went to the moon!
Kylan Granger played the part of Lurch brilliantly – his mannerisms were superb. And that deep singing voice! Wow!!!
Grandma Addams was superbly played by Leah Ogrizovic. Fabulous characterisation and delivery, and perfect comedy timing.
The Beinekes worked well as the “normal” family or were they?) with excellent performances from Dean Harness as Mal, Phoenix Bass as Alice and Alex Bower as Lucas. Alices transformation after drinking from the chalice was hilarious, and well done to Alex (Lucas) on making his debut performance with Keighley MTC.
The whole effect of the dead ancestors was stunning; hair and makeup need to be praised. There was so much attention to detail and that really makes a difference to a production of this standard.
The set was full of grandeur and spookiness – the finishing touches and attention to detail were brilliant. The sound (Oliver Trenouth) was crystal clear from every single person on stage, and the lighting (Mark Remde & team) effects were outstanding.
The company had great individual characters to play as dead ancestors. Staying in character is hard and each and every one of them nailed it. I felt it really enhanced the production having the ancestors “observing” everything that was going on – and every single one of them was in total character 100% of the time.
This was a show packed full of humour and fantastic characters with fabulous songs and dance routines. The audience was totally enthralled throughout the whole show.
Huge congratulations to the production team – Giles Atkinson (Director), Judith Chapman (Choreographer) and John Sandland (Musical Director). You certainly brought this production to life and gave us, the audience, a superb evening’s entertainment with such a professional show in every way.
Sally Holmes 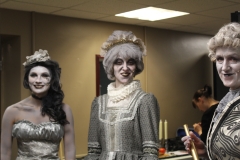 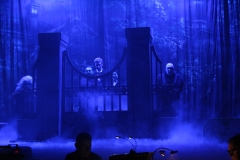 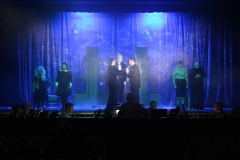 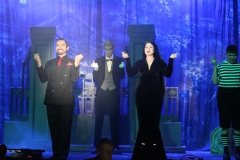 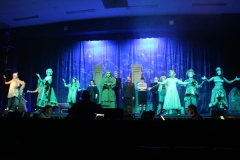 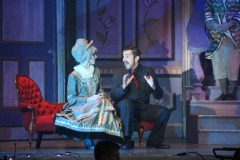 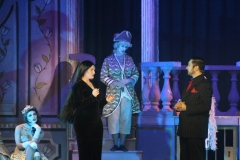