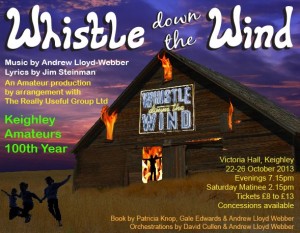 We were delighted to secure the rights for the amazing musical “Whistle Down The Wind” for our 2013 Centenary year.

Based on the novel by Mary Hayley Bell and subsequent Richard Attenborough-produced film, Whistle Down the Wind follows the fortunes of a fugitive caught between the prejudice of adults and the innocence of the young.

Whistle Down the Wind revolves around the time and place where the word teenager was invented. Swallow, a 15 year-old-girl growing up in America’s deep South in the fifties, discovers a mysterious man hiding out in a barn. When she asks who he is and the first words he utters are “Jesus Christ”, it’s as if all her prayers have been answered. Swallow and the town’s other children vow to protect the stranger from the world that waits outside – the townspeople who are determined to catch a fugitive hiding it their midst. As fantasy and reality collide, Swallow is torn between the two and begins to discover who she is and where she is going.

Andrew Lloyd Webber’s emotive score combines hauntingly beautiful love songs and explosive rock music with lyrics by acclaimed rock’n’roll songwriter Jim Steinman. The score contrasts the relentless influence of the modern world with the traditional values of the old days – something which the community at the heart of Whistle Down the Wind yearns to return to.